MOOD Podcast has now been wrapped up into a nice, little, smooth (kind of) bundle, and it’s official to say that through several minutes in the back of my car and Uni campus, we have formulated a DA.

So sit down and kick back and have a read of our little evolution of MOOD Podcast.

‘MOOD’- Music, Online, Open Discussion, originally started with the idea that I and Anthea wanted to get into Podcasting. And as myself and Anthea are pretty much the same person, we love the same music, and so we knew what the Podcast would discuss, which was anything music-related.

We decided to ask our mates Saxon & Jas if they wanted to join and then became a group. As a joke, Saxon’s annoying personality that I quite enjoy kept repeating the word ‘Mood”  one day in class, and so that’s where the idea grew and we gave mood an official title and meaning.

Since then the four of us have been discussing many things over the past semester, from music genres that we all love (or hate), songs and artists that make us happy, cry, or songs that make us dance non-stop, as well as Iconic Australian Festivals. The whole point of MOOD was to talk about anything music-related naturally, through a flow of conversation, without any set structure or thought out topics, we wanted to do this in a spontaneous manner. And this worked, as we found ourselves talking non-stop about certain topics every week.

“Mood” hasn’t been running as smoothly as hoped, but that’s just the nature of certain group DA’s, as it’s hard to rely on every team member. But overall the podcast has been able to run live and ready thanks to myself and Anthea, as we have been running MOOD and allowing each episode to become uploaded, shared and spread across social media. Anthea has been recording and editing each episode/uploading them onto YouTube, whereas I have been managing our Instagram account, sharing glimpses of each episode, and creating a flow-through our feed, and creating a specific aesthetic for our account.

Reaching the end of DA, we have now got 4 episodes live and ready on our Youtube channel each ranging from 15-30 min each about different topics every week. 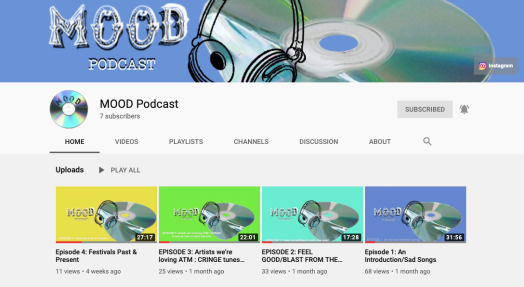 Both the YouTube channel & Instagram account was a fast, inexpensive, simple and tiny option for our content to exist on, as well allowing us to reach wider audiences, and unique accounts (can see through screenshots). I was able to follow a range of accounts that related to the typical “mood” listener, as well as popular Australian musicians, radio shows, tv shows, international artists, festivals, celebrities, which all related to music.

(What the typical “MOOD” listener may be summed up as) 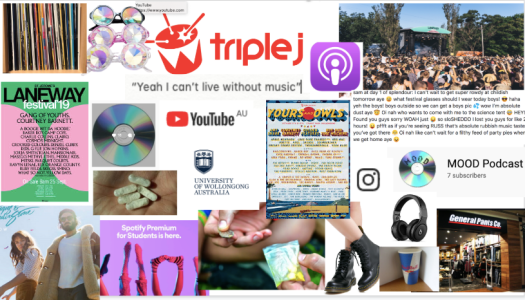 After posting 30-sec Instagram stories, they proved to be the most successful element earning up impressions over 1000 times, as well getting our viewers to answer questions which we have gotten several responses too. As well as posting snippets from each podcast every week and then matching it along with graphics and templates that can make the account aesthetic in a current, trending and digital way through colourful glitch backgrounds. We’ve also decided to post photos of live concerts we’ve been too as well as artists we listen too. Overall allowing our account to look clean, structured but very fresh and funky at the same time. And this also helped our YouTube views and subscribers (but unfortunately since the beta, our subscribers have remained the same, but Instagram impressions have grown). 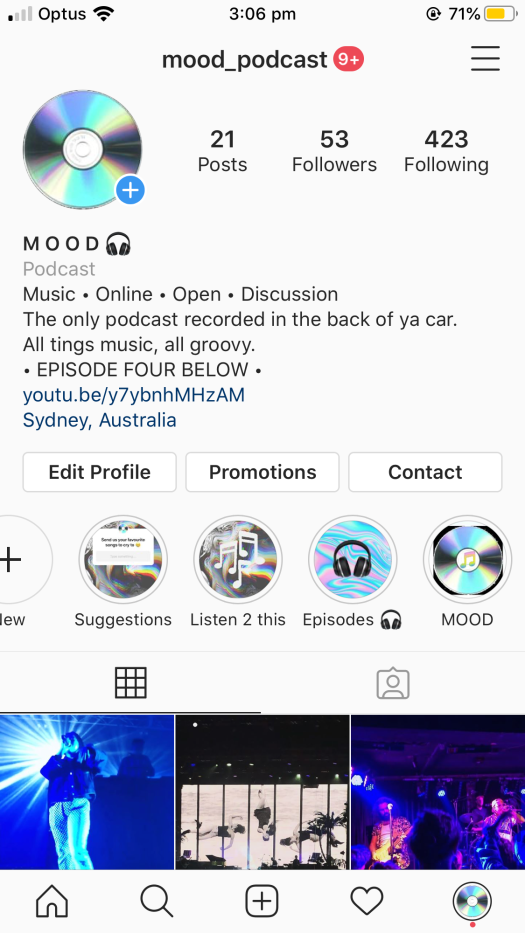 Utilizing YouTube, Instagram, as well as Reddit, all proved to be overall successful, as they allowed any possible idea to grow into a digital artefact. Reddit was one of the big helpers that allowed us to gain more YouTube views on our first video as I remember it reaching over 50 views after I made a Reddit post. And I’ve continued using Reddit for our channel to gain any tips or tricks that we may have not known, as well as joining several subreddit groups that could be interested in our content.

AUSTRALIA ONLY- Fave aussie music festivals to go to? from musicfestivals

How long is too long for a Podcast episode? from podcast

Music conversation – What are everyones favourite feel-good songs? from CasualConversation

Music Podcast created by 4 mates in the heart of Wollongong- Check it out! from wollongong

Overall the biggest learning curve within this DA was the aspect of “teamwork”, and this was the biggest downfall that didn’t allow MOOD to grow and collaborate as much as myself and Anthea had originally hoped when we decided to start a music podcast. But we are proud either way of the content that was uploaded, especially the funky looking Instagram account.