Since starting the Game Media subject I’ll admit it has been quite unnatural for me to complete any assignments with ease and pure understanding. In saying so, my digital artefact was one aspect where I could pick an idea and topic that I was most familiar with in terms of game media and gaming texts.

I decided to embed my association and liking of ‘Ready Player One’ film within my DA and further discuss, analyse and create an audiovisual essay about Virtual Reality. As the weeks went on, I slowly but surely shaped my topic into a more concise and clear ideation around the BETA stage. Now my final concept has been shaped into 5 different parts, which will all be featured within my visual essay, through the overall topic of,

The relationship between Games and Cinema expressed by the technology of VR. 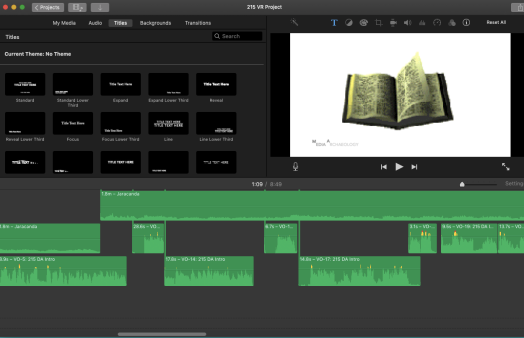 For my final artefact, I used my BETA submission as an opportunity to get a head start and finalise my overall script for my video essay. I then spent over 2/3 weeks after that gathering video footage, research visuals/videos and Gifs to make up for the visual content that will be shown in my video.

Together with my script and visual footage I was able to produce an 8-9 minute video essay, which has been uploaded to YouTube. I used iMovie for all my recording/editing purposes and was able to create an audiovisual video that I’m quite proud of since I come from a background where I have almost no experience with gaming industries and games in general.

I was able to gather and utilize a number of various sources in my final project. This includes 3 academic sources, over 4 online websites, and numerous real-life footage, from Morton Heilig’s Sensorama display, Ready Player One behind the scenes clips, and a whole range of images that portrayed my media archaeology. All of these sources were at the backbone of my script and allowed me to arrange a video that explored 5 significant parts of research, such as;

Part 1- The definition of virtual reality & what is it.

Part 2- Dating back to its history – explaining the evolution (unpacking my media archaeology).

From Visual Simulation to Virtual Reality to Games: http://wiki.arl.wustl.edu/images/4/47/Zyda-2005-computer.pdf

Part 4– Close focus on media text- Ready Player One – How VR drives the narrative and the understanding of games in that film, as well as the concept of immersion.

From Visual Simulation to Virtual Reality to Games: http://wiki.arl.wustl.edu/images/4/47/Zyda-2005-computer.pdf

“Ready Player One’: VR Might Be a Reality Sooner Than Expected: https://www.inverse.com/article/42754-virtual-reality-ready-player-one

Overall I tried my hardest to take on feedback through each of the submission rounds, and I through much effort I believe I have done the best I can. Especially within a scope that I wasn’t too familiar with until this semester, and I’m unsure if my analytical framework was improved through the final stage of this project, but after all, I can say that through just this Digital Artefact I have learnt a lot more within the Game Media subject.

One Reply to “A Digital Artefact is done & dusted.”